When the United Kingdom completed its telecom supply chain review[1] last year it gave a green light to Huawei by concluding that nationality-based bans did nothing to improve network security and could actually harm it by weakening competition. Executives at Huawei celebrated what they saw as a victory for evidence-based decision-making.

The decision also seemed to vindicate the many critics of Australia’s telecom sector security review[2], which the previous year reached exactly the opposite conclusion and decided to ban Huawei (and any other Chinese companies) from supplying equipment for use in Australia’s 5G mobile rollout.

Even the compromise[3] that Prime Minister Boris Johnson’s government announced at the end of January 2020, to exclude Huawei from the “core” of the 5G network and from sensitive areas such as military installations, but to otherwise allow it to have an up to 35% market share, was an outcome the firm could live with.

Huawei’s last big hope had been the UK

The decision reportedly caused outrage[4] in the Trump White House, and left a number of Conservative Party back-benchers seething.

Since then, Johnson has backtracked[5], and on Monday appeared to close the door on Huawei saying he was determined the UK should not be “in any way vulnerable to a high-risk state vendor[6]”.

It follows intense pressure from the US Department of Commerce which has announced plans to bar Huawei and its suppliers from using any American technology or software[7].

Read more: Why the global battle over Huawei could prove more disruptive than Trump's trade war with China[8]

Britain’s National Cyber Security Centre[9] has increased the pressure, urging that Huawei equipment be removed from the country’s networks on the grounds that the new US restrictions will force it to resort to “untrusted” technology solutions.

The Sydney Morning Herald[10] reported on Monday that Huawei had “lost the anglosphere”.

Recent reports indicate that France, which had also opted for a compromise by restricting Huawei from the core of its network and from Paris, but allowing it in the rest of the country, is now considering a multi-year phase out[11] of all Huawei equipment.

It may have lost the West

It remains to be seen how this plays out in a number of other key European countries, such as Belgium, where Huawei has more than 70% of the market in some areas, as well as Germany, which until now has been adamant it won’t ban[12] Chinese suppliers.

The company faces something of a united front[13] including each of the Five Eyes[14] countries of Australia, Canada, New Zealand, the United Kingdom and the United States, as well as France and India, which has recently moved to ban[15] a whole slew of Chinese mobile apps including TikTok.

In some ways, it seems surprising given the fact that nobody, least of all the American security hawks have been able to adduce any hard evidence[16] that Huawei represents a greater security risk than any other major supplier.

In other ways, it is less surprising given the Trump administration’s increasingly confrontational approach and China’s increasingly assertive push-back. Its June 30 decision to impose a new security law[17] on Hong Kong has only helped to further harden attitudes in the West, particularly the UK.

It was always going to be hard for Huawei to stay in Western markets.

It was hard to please two masters

Once it grew to the size it has enjoyed for about the last ten years, and once it took on the strategic importance that comes with being one of the world’s top suppliers of 5G network equipment, Huawei was inevitably going to find it difficult to please an increasingly nationalistic Chinese leadership while not alarming nervous governments in Western capitals. 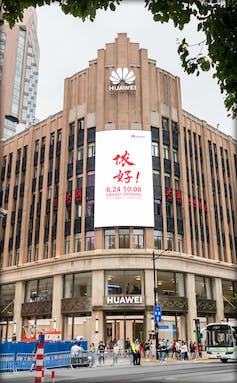 Huawei has a massive domestic customer base. Sipa USA

In China it had to demonstrate unwavering loyalty to the goals of the Communist Party leadership. Outside China it had to argue that it had little or nothing to do with the Chinese State.

Operators love Huawei[18] because it has consistently proven better than its competitors on price, tailored customer service and innovation. But it is governments that regulate telecommunications networks and that must take the big decisions on what companies will be admitted as suppliers.

For executives at Huawei there are no easy choices.

The size of its domestic market has given it the massive economies of scale it has needed to be competitive globally, so that it cannot jeopardise its position at home.

Its role in global markets has allowed it to innovate.

Most of its technological breakthroughs have been achieved through its many partnerships abroad. To walk away from these would weaken its market leadership.

Once the US-led campaign against Huawei began in earnest in 2018 it circled the wagons and centralised control of its external messaging and overseas representation in the hands of its longest-serving or most successful employees, all of whom were Chinese.

These were predominantly engineers by training and had no inclination to defend the company on any terms besides its track record as an equipment vendor and its cyber-security credentials (which from an industry perspective are pretty solid).

Read more: Blocking Huawei from Australia means slower and delayed 5G – and for what?[19]

Even if it had done something different back then, nothing would have helped it overcome the contradictions of trying to appear to be a loyal corporate citizen in China while at the same time claiming to be just another normal private-sector company abroad.

The limited space it has to operate is becoming increasingly narrow to the point where in many markets it is no longer able to appear to be both.

Another important point worth bearing in mind is that Huawei is not alone in seeing its market access curtailed because of its country of origin. This has also long been happening to Western companies in China.

For many years, China has been trying to raise its level of indigenous innovation[20] making it increasingly difficult[21] for foreign suppliers.

In December it reportedly decided to phase out[22] all foreign-owned software and hardware from Chinese government operated IT systems.

This means China has itself accepted the logic that the country of origin of a supplier matters for security and industry development.

It leaves us heading towards a world of increasing fragmentation and higher costs, with many arguing, in both China and the West, that this is the price we’ll have to pay for greater security.

Read more: China could be using TikTok to spy on Australians, but banning it isn’t a simple fix[23]