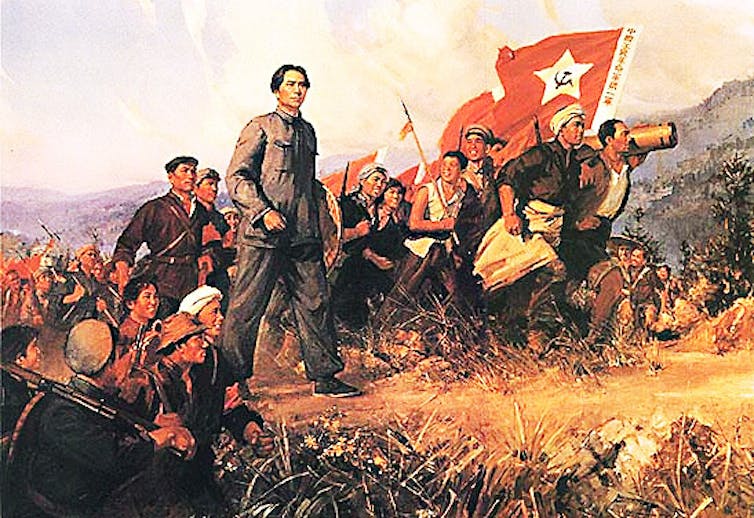 In 1934, Mao Zedong’s embattled guerrilla forces began what was to prove an epic military withdrawal from southern China to a stronghold in the north of the country.

This became known as the Long March[1]. It enabled the Communists to break out of so-called “encirclement campaigns[2]” to fight another day against Chiang Kai-shek’s Nationalists.

In Chinese Communist Party history, there is hardly a more indelible moment. It is certain to have been imprinted on the consciousness of Xi Jinping by his father Xi Zhongxun[3], a Mao-era military commissar and later a vice premier.

In Chinese history, there is hardly a more indelible moment than the Long March. www.schoolshistory.org.uk

Fast forward to 2021, and there have been signs in recent weeks of China seeking to reduce the risk of geopolitical isolation in its own diplomatic “long march” – to become the pre-eminent power in the Asia-Pacific and global rival to the US[4].

Sometimes forgotten in the ideological debate in the West about Beijing’s motivations under Xi is that Chinese leaders are pragmatists conditioned by ruthless internal Communist Party politics.

So a reasonable question now is whether Xi and his advisers have understood that the risks of overreach in China’s interactions with the outside world outweigh the benefits.

In other words, where lies the zero-sum game[5]?

One aspect of Chinese statecraft to keep in mind is that Beijing will seek to get away with whatever it can.

Viewed from behind the vermilion walls of Zhongnanhai, Beijing’s leadership compound, American-led efforts to “contain” China[7] will have taken on some of the characteristics of an encirclement campaign.

Beijing’s reaction has been relatively muted, by its standards, to the recent announcement of the AUKUS alignment[8] between Australia, the UK and the US as a China containment front. But Chinese leaders will nonetheless view this as part of a latter-day encirclement campaign.

Likewise, the elevation of the Quad grouping[9] of the US, Japan, India and Australia would be seen in Beijing as a further example of US-led China containment architecture.

Beijing will see a recent meeting of the Quad in Washington as another example of encirclement. Sarahbeth Maney/EPA/AAP

Apart from the usual bluster[10] in Chinese Communist Party mouthpieces like the Global Times, what has been Beijing’s response to all this?

The short answer is that it has been engaging in some creative diplomacy to lessen risks of geopolitical isolation.

In Canberra policymaking circles, dominated by a national security establishment wedded to seeing China as a threat, the above developments might be weighed.

Read more: View from The Hill: For Morrison AUKUS is all about the deal, never mind the niceties[11]

In the case of Xi and Biden, the issue is not so much whether there is a thaw in Sino-US relations after the wrenching Donald Trump era. It is more about whether the world’s dominant powers can establish a relationship that enables reasonable dialogue and even co-operation.

In the Xi-Biden phone call on September 9, the two agreed there was too little communication between Beijing and Washington. It was followed this month by a six-hour in-person meeting in Zurich between National Security Adviser Jake Sullivan and Chinese counterpart Yang Jiechi[12].

The upshot is that Xi and Biden will meet “virtually” within weeks.

Significantly, Biden in his conversation with Xi reiterated America’s commitment to the spirit of the Shanghai communique[13] that enabled the issue of Taiwan to be set aside.

This should be regarded as a positive development.

In Beijing’s dealings with the European Union, the several sessions with top European officials conducted in late September by Chinese Foreign Minister Wang Yi are notable.

These were aimed at clearing the air after strong criticism and censure in Europe of China’s mistreatment of its Uighur minority, and arguments over Taiwan.

In another important development, Xi was due last Friday to speak with European Council President Charles Michel.

On Wednesday of last week, the Chinese leader held a “friendly” phone call[14] with outgoing German Chancellor Angela Merkel. The two discussed preparations for the G20 summit in Rome[15], climate change issues ahead of COP26 and the European Union’s stalled investment agreement with China[16].

The latter has been interrupted because of tensions between Beijing and Brussels on the Uighur issue and other stresses.

This flurry of diplomatic activity could not contrast more sharply with the deep freeze[17] in relations between Beijing and Canberra, with high-level contacts at ministerial level suspended.

Perhaps most significant of recent China’s diplomatic manoeuvres has been its request to join the CPTPP, which groups 11 Asia-Pacific countries in a trade bloc.

Read more: Australia has a great chance to engage in trade diplomacy with China, and it must take it[18]

The Obama administration originally conceived of the CPTPP as a means of pressuring China on trade and security issues. Trump’s abandonment of the trade bloc has enabled China to make a bid for membership.

The Australian government has said China could not be considered for membership[19] until it relaxes its punitive trade campaign against Australian exports. Individual members have veto power over new entrants.

In any case, Beijing would have difficulty meeting the trade-liberalisation requirements of the CPTPP.

On the other hand, China’s request for membership simultaneously with that of Taiwan renews focus on regional trade agreements in which Beijing is active.

The release of Huawei executive Meng Wanzhou back to China has removed a major diplomatic hurdle between Beijing and Washington. Darryl Dyck/AP/AAP

On the diplomatic front, the deal enabling Huawei’s Meng Wanzhou’s return to China[20] from Vancouver in a hostage swap removed a significant irritation in US-China ties.

Finally, China’s announcement it was ending its funding of coal-fired power stations abroad was clearly aimed at window-dressing its patchy performance on climate issues[21] ahead of the G20 summit in Rome and COP26 in Glasgow.

These diplomatic shifts do not necessarily amount to a breakout moment for China in its troubled relationship with the international community. But it would be a mistake for countries like Australia to assume China will continue to alienate a wider international community if it believes its actions are proving inimical to its own interests.