In an apparent about face, the NSW government has halved land tax[1] for developers of build-to-rent housing.

It came weeks after the the Treasurer Dominic Perrottet launched a report that called for a greater reliance on land tax[2] as a replacement for stamp duty.

The greater reliance on land tax is a long-term goal. At the moment family homes are exempt, along with boarding houses, caravan parks, retirement villages and farms. Most other users pay land tax, including landlords[3] and businesses.

The change will give developers who invest in build-to-rent schemes offering long tenancies[4] a 50% discount on their land tax for 20 years.

If you want to rent from a corporation, or from someone with wide experience in owning and renting properties, you’ll find it hard. 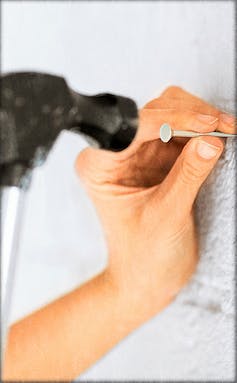 Nails in walls can cause problems for tenants.

Individuals who own just one property have put most of their eggs in one basket.

Because they can’t afford for anything to go wrong they check the condition of the property regularly.

They prohibit nails in walls and pets, and typically offer only short-term leases.

Corporations can play the law of averages.

Because they know most properties will be well maintained they are satisfied with less-frequent inspections. They allow modifications, and typically offer long-term leases.

They offer an experience pretty close to ownership, in return for rent.

It’s this that the NSW government wants to encourage.

To ensure it happens and to ensure built-to-rents don’t revert to the Australian pattern of individual investors owning individual units, it will specify that the apartments have at least 50 units and are managed under unified ownership[7].

At the moment such developments are discriminated against when it comes to land tax. No tax is due if the land value is below a threshold.

Individual landlords are usually below the threshold (some spreading their portfolio between multiple states to ensure they don’t trigger each state’s threshold).

Wholly-owned apartment blocks are above the threshold and can’t escape it. University of Technology Sydney calculations suggest land tax on build-to-rent developments can consume up to 27% of the annual rent collected.

Read more: 'Build to rent' could be the missing piece of the affordable housing puzzle[8]

And they are subject to goods and services tax. They can reclaim some of it but not all.

The announcement comes at a time when the COVID crisis has cut stamp duty receipts and created an oversupply of vacant apartments, particularly around universities.

The initiative appears to have been crafted before the crisis and to be more forward looking. Many of the build-to-rent projects will take years to complete.

It’s about changing the mix

That said, any extra building activity will support the construction industry and extra stock will reduce home prices and rents.

The initiative doesn’t spell the end of mum and dad landlords. They will still predominate for a long time.

It’s about providing options and security for tenants that isn’t widely available and will become more important as a greater proportion of Australians rent[9].

Other states will be taking note.

Read more: What Australia can learn from overseas about the future of rental housing[10]

For a government that wants to eventually make land tax universal, the 50% cut is a step in the wrong direction. It might have been better to remove the threshold for small landlords.

But there’s no sign the NSW government has given up on its longer term goal. It’s unlikely to be the last time land tax rules are changed.