This looks like a classic example of what political scientists and commentators call an “October Surprise” – a news story deliberately timed to influence the US presidential election.

Read more: The first US presidential debate was pure chaos. Here's what our experts thought[2]

Much is at stake – the presidency, as well the entire House of Representatives and one-third of the Senate. What is in the minds of voters before they vote is crucial. This gives interested parties great incentive to strategically time the release of information they might have been holding on to for some time.

A well-timed “bombshell” can sway the outcome. But what is the best timing? The first Tuesday in November is still a long way off. Why not wait?

Trump had his “Access Hollywood tape[3]”, featuring him talking crudely about women. The Washington Post published the tape on October 7, two days before his second debate with Clinton. Given the recording was from 2005, it is hard to conclude the timing of the Post’s publication wasn’t strategic – if not by the newspaper then by the source of the material.

But this October Surprise arguably proved far less damaging than the bombshell that hit Clinton just 11 days before the election, when FBI director James Comey announced the bureau was reopening its investigation into Clinton’s use of a private email server while US Secretary of State.

The FBI had previously investigated and deemed Clinton and her team extremely careless in not using secure government emails to handle classified information. But it recommended no charges. The case was reopened when more emails, sent by Clinton aide Huma Abedin on the laptop of her husband Anthony Weiner, were found. Making the story even juicier was that the FBI found the emails while investigating Weiner for sending sexually explicit messages to a 15-year-old girl. 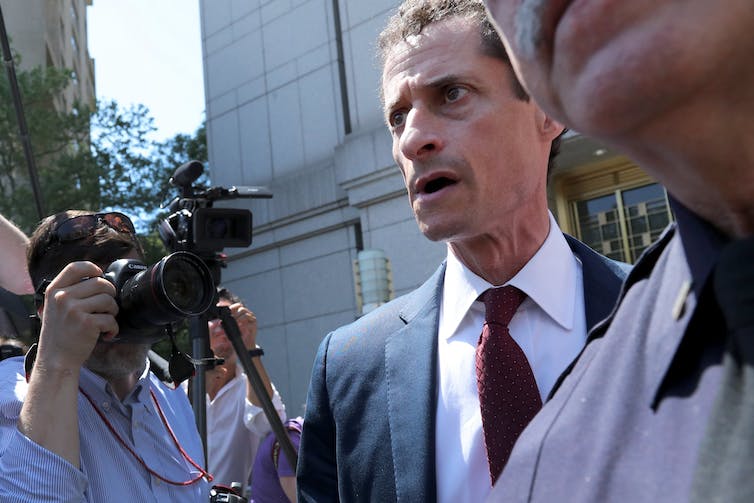 Anthony Weiner leaves court in New York on May 19 2017 after pleading guilty to sexting with a 15-year-old girl. Andrew Gombert

While there is no suggestion Comey’s announcement was a deliberate October Surprise, its timing certainly didn’t help Clinton. Nothing came of the reopened case. Had Comey made the announcement a few weeks earlier, the election might have gone to Clinton.

Read more: Why Weiner is Wonderful[4]

The superficial lesson from 2016 might appear to be that the closer to the election you can drop a bombshell, the better.

Indeed analysis of political scandals since the late 1970s show more occur with as as an election get closer. 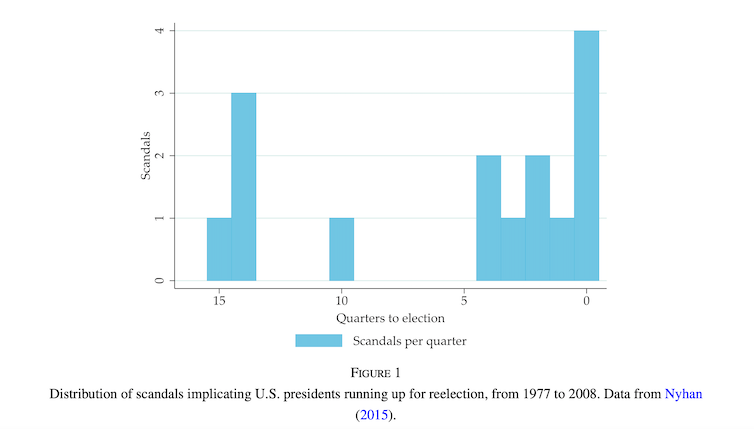 Gabriele Gratton, Richard Holden and Anton Kolotolin, 'When to Drop a Bombshell', Review of Economic Studies, 85(4), 2018: 2139-2172. But too many scandals bunched too close to an election is likely to blunt their impact. Voters might rationally assume scandals are more likely to be fake the closer they erupt to election day. They have good reason to be sceptical. It is also rational for anyone wanting to influence the outcome with fake news to deny voters the time to distinguish between fact and fiction. So when is the best time to drop a bombshell for maximum impact? My analysis with colleagues Gabriele Gratton and Anton Kolotilin (in the Review of Economic Studies[5]) shows fake scandals are more likely closer to elections. This includes “Billygate” claims in October 1980 that President Jimmy Carter’s brother Billy was a Libyan agent of influence, and “Filegate” claims in 1996 the Clinton White House had improperly acquired access to FBI files on political opponents.

Distribution of real and fake scandal claims concerning US presidents and candidates. Gratton, Holden and Kolotilin (2017), 'When to Drop a Bombshell',, CC BY-NC-ND[6][7] So there is a strategic trade-off between credibility and scrutiny. On the one hand, dropping the bombshell earlier is more credible, in that it signals that its sender has nothing to hide. On the other hand, it exposes the bombshell to scrutiny for a longer period of time — possibly revealing that the bombshell is a fake. Time adds credibility 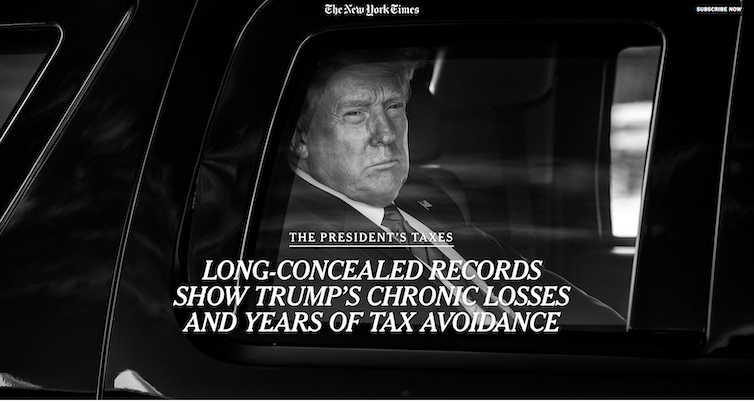 The New York Times reveals Donald Trump’s tax information on September 27 2020. The New York Times[8] What, then, to make of the New York Times[9]’ bombshell on September 27, two days before Trump’s first debate with Joe Biden, that: Donald J. Trump paid [US]$750 in federal income taxes the year he won the presidency. In his first year in the White House, he paid another [US]$750. He had paid no income taxes at all in 10 of the previous 15 years — largely because he reported losing much more money than he made. Only the Times knows when it first could have run this story. But it has released its story far enough before election day that there is time for a good deal of scrutiny. Given the nature of the story, the newspaper’s claims are likely to be proven true or false quickly. The lead time is reason to have confidence in the story’s accuracy. Adding to the story’s credibility is what economists call a high “prior belief” about Trump being someone who lies and cheats. Read more: From Washington to Trump, all presidents have told lies (but only some have told them for the right reasons)[10] We can probably count on more than a few more bombshells about Trump or Biden as November 3 draws closer. But the basic strategic considerations highlighted by our model suggests the closer a bombshell drops to election day a bombshell drops, the greater the reason to question its credibility.