Two slippery and elusive phantoms seem to be escaping UK Prime Minister Boris Johnson and his Conservative government. The first is the fiendishly viral and deadly COVID-19 pandemic[1].

The number of covid-related deaths in the UK has passed 100,000[2], making it the first nation in Europe to pass this milestone. The UK now has the fifth-highest death toll in the world. The Johnson government has struggled to manage the crisis, and the human cost is higher than the total civilian casualties the UK experienced during the second world war.

As elusive for Johnson, who for so long has played arch-buffoon[3] and joker[4], is political capital[5]. The concept of “political capital” feels intuitive – popular politicians seem to have a lot of it, and unpopular ones seem to have none of it. Yet, political science has long wrestled with trying to define and understand it.

The notable sociologist Pierre Bourdieu was one of the first to grapple with the idea. The academic Kimberly Casey[6] argues that political capital is analogous to a cake – it requires a number of ingredients and, crucially, not all of them were initially made by the baker. Richard French[7] suggests political capital is made of up of:

[…] mostly intangible assets which politicians use to induce compliance from other power holders [such as business leaders].

After his emphatic 2019 election win, Johnson seemed to have stacks of it. He won a landslide majority of 80 seats[8] and notably broke into Labour’s “red wall[9]” (although the starkly majoritarian electoral system[10] skewed Johnson’s victory margin). 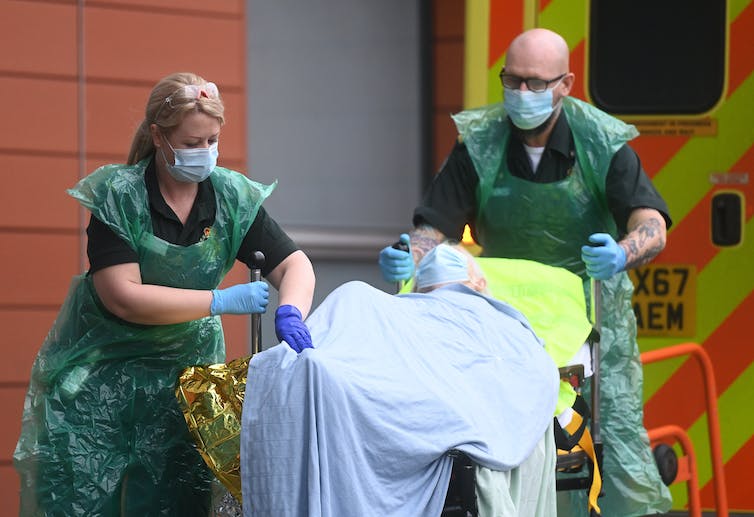 A rampaging virus has meant a bleak winter in the UK, which has just passed 100,000 COVID deaths. Facundo Arrizabalaga/EPA/AAP

Johnson has made a number of serious political misjudgements in responding to the pandemic. First, his government has repeatedly been slow off the mark to deal with the crisis. At the outset of the first wave, it played down[11] the risks. In March 2020 he was arguing the UK would “turn the tide[12]” in 12 weeks.

Johnson’s government was slow to handle the second wave, attempting[13] a relaxation of restrictions over the Christmas period. The government’s chief medical officer, Sir Patrick Vallance, asserted an earlier lockdown could have made a difference[14]. More striking was this claim relating to the first wave by one of the scientists[15] advising the government, Professor Neil Ferguson:

Had we introduced lockdown a week earlier we’d have reduced the final death toll by at least half.

Johnson also made of habit of either marginalising[16] or just ignoring[17] scientific advice. In tandem with handling the pandemic, Johnson was under immense pressure to deliver a Brexit deal while also dealing with the “economic emergency[18]” of the crisis.

More damningly, there appears to be no overarching and clear strategy[19] to deal with the COVID-19 crisis. Johnson’s government has had to make numerous and predictable policy U-turns[20] on a range of issues.

Poor communication[21] has also been a hallmark of the period. The government’s “stay alert” campaign last May was met with public bemusement. The belated introduction of a tier system in October[22] also seemed to cause confusion and was followed by further England-wide lockdowns.

Johnson’s approach has been bedevilled by trying to meet the health challenges while simultaneously trying to rebuild the economy and manage the spiralling costs[23] of the pandemic. The government’s “eat out to help out” scheme proved disastrous, with evidence[24] it appears to have contributed to the devastating second wave.

Worse still were the complacency and apparent hypocrisy that are part of Johnson’s political calculus – not least his handling of the damaging trip[25] made by his then-top aide Dominic Cummings to “test his vision[26]”. Johnson’s own father Stanley[27] has seemingly flouted lockdown rules, all while his government hectors the public. The double standards in Johnson’s approach give an impression of “one rule for us” and serve as a reminder of the levels of inequality[28] in the UK.

Read more: As a second wave of COVID looms in the UK, Australia is watching closely[29]

There are systemic factors[30], beyond Johnson’s leadership, that help explain the flailing response to the pandemic in the UK. In a considered essay, Ferdinand Mount[31] brutally reminds us of the systemic dismantling of the NHS and neo-liberal reforms under both Conservative and Labour governments, and the austerity measures that have left the system struggling. Mount’s judgment is:

The malign combination of an over-centralised system and a hopelessly narcissistic prime minister has been fatal.

Will Johnson be able to remake his political capital? If he manages to ride out the current crisis, he has a number of available strategies and systemic advantages.

First, he stuffed his cabinet full of loyalists, many owing their political careers to his backing – even when they break ministerial codes[32]. Johnson is now trying to get on the front foot, expressing[33] “deep sorrow” for the mounting death toll, and a change in advisers[34] is resetting his political strategy. He is adept at downplaying criticisms with the “benefit of hindsight[35]” argument.

Crucially, the UK is not scheduled to head to the polls until 2024. If the vaccine strategy works, Johnson knows future elections are not often decided by a government’s record in the early part of a term.

Read more: As COVID rampages through Europe, it will test not just health systems but social cohesion[36]