Talk of war has become louder[1] in recent days, but the “drumbeat” has been heard for some time now as China’s military capabilities have grown. China does not want war, at least not yet. It’s playing the long game and its evident intentions become more unnerving.

Scholars like Brendan Taylor have identified four flash points[2] for a possible conflict with China, including Korea, the East China Sea, the South China Sea and Taiwan, but conventional war is not likely at this stage.

Where tensions are currently high

The armistice between North and South Korea has held for nearly 70 years[3]. The pandemic has severely constrained North Korea’s economy and its testing of intercontinental ballistic missiles has ceased, for now. China has a stake in keeping Kim Jong-un’s regime in power in the North, but the prospects of reverting to a hot war have flowed and ebbed.

Just south of Korea, in the East China Sea, China has intensified its military activities[4] around the Japanese-claimed but uninhabited Senkaku Islands. China appears to be wearing down Japan’s resolve to resist its claims over what it calls the Diaoyu Islands.

The United States has assured Japan the islands fall under their mutual defence security guarantee. But a confrontation with China could test US backing and possibly set the stage for escalated confrontation elsewhere. 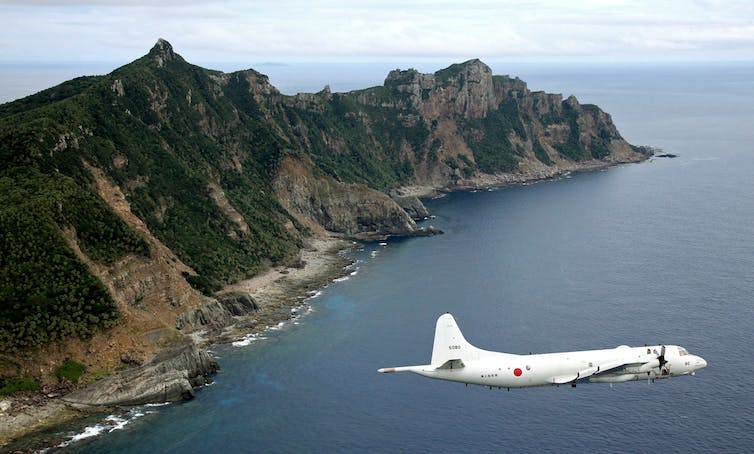 Similarly, China’s industrial-scale island building in the South China Sea has resulted in extensive military hardware and infrastructure[5]. This will enable the Chinese to consolidate their position militarily and assert control over the so-called nine-dash line[6] — its vast claim over most of the sea.

The US Navy continues to conduct freedom of navigation operations (FONOPS[7]) in the sea to challenge China’s claims[8]. With thousands of marked and unmarked Chinese vessels operating there, however, the risk of an accident triggering an escalation is real[9]. 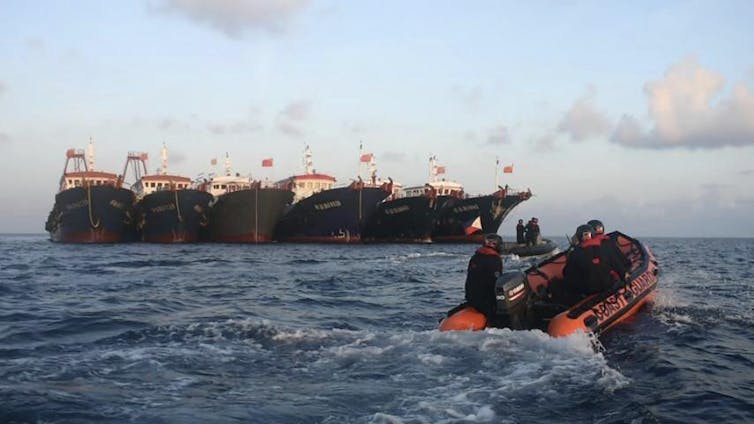 In 2016, an international tribunal[10] rejected China’s claims to the waters in a case brought by the Philippines. Despite being a signatory to the UN Convention of the Law of the Sea, China has ignored the tribunal’s ruling and continued to intrude on islands claimed by both the Philippines[11] and Indonesia[12].

Recently, 220 Chinese vessels were anchored for months at a reef[13] inside the Philippines’ exclusive economic zone. China’s actions appear premised on the dictum that possession is nine-tenths of the law[14].

Like China’s seizure of the Scarborough Shoal in 2012[15] that preceded its massive island construction further south[16], China could conceivably take the unwillingness of the US to challenge its latest moves as a cue for more assertive action over Taiwan.

This is, after all, the main prize[17] Beijing seeks to secure President Xi Jinping’s legacy.

Taiwan presents the US and its allies with a conundrum. It is a liberal open democracy and the world’s leading computer chip maker[18]. It also sits in the middle of what military strategists refer to as the “first island chain[19]” stretching from Japan in the north to the Philippines in the south. Its strategic significance is profound.

Having adopted a “One China” policy[20] since 1979, the US security guarantee for Taiwan[21] is conditional and tenuous. Reflecting growing unease over China’s actions, polls show strong US public support for defending Taiwan[22].

So far, ambiguity has served US interests well, providing some assurance to Taiwan while discouraging the PRC from invading.

This guarantee has been important for Japan, as well. With its pacifist constitution, and occasional concern over US commitment to its defence, Japan would be closely watching how the US approaches its Taiwan policy.

Read more: Australia would be wise not to pound 'war drums' over Taiwan with so much at stake[23]

Meanwhile, China has metamorphosed both economically and militarily. An exponential growth in China’s military capabilities[24] has been matched by a steep rise in the lethality, accuracy, range and quantity of its weapons systems. On top of this, Beijing has ratcheted up its warlike rhetoric and tactics[25].

Last month, Xi made a muscular speech to the Boao Forum Asia[26], calling for an acceptance of China not only as an emerging superpower but also as an equal in addressing global challenges. 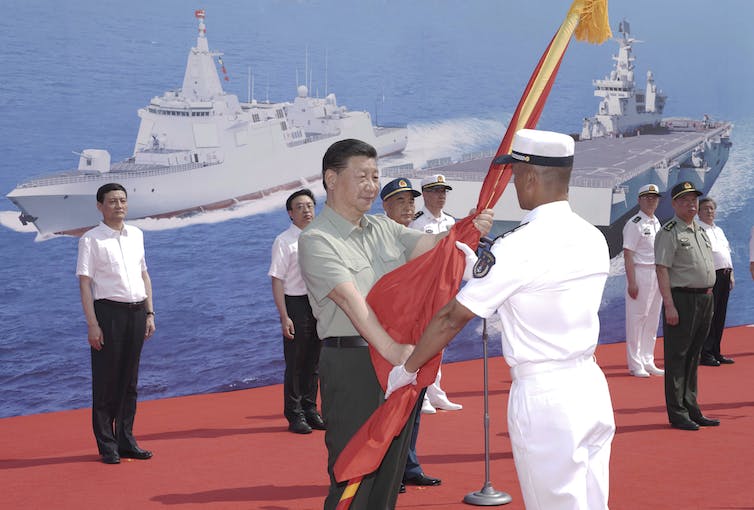 Sometimes actions speak louder than words. And China’s actions so far have avoided crossing the threshold into open warfare, refusing to present a “nail” to a US “hammer”[27]. This is for good reason.

If war did break out, China would be vulnerable. For starters, it shares land borders with 14 countries[28], bringing the potential for heightened challenges, if not open attack on numerous fronts.

Read more: Is it time for a 'new way of war?' What China's army reforms mean for the rest of the world[29]

Then there are the economic concerns. China has significant Japanese[30], US and European industrial investments[31], and is also overwhelmingly dependent on energy and goods passing through the Malacca Strait between Malaysia, Singapore and Indonesia, the Indo-Pacific’s jugular vein.

This reliance on the Malacca Strait — referred to by one analyst as the “Malacca dilemma[32]” — helps explain why China has invested so much capital in its Belt and Road Initiative[33] and studiously avoided open conflict, at least until it is more self-reliant.

To avoid outright war, China evidently reckons it is better to operate a paramilitary force[34] with white-painted ships and armed fishing vessels in the thousands to push its claims in the South China Sea and East China Sea and constrict Taiwan’s freedom of action.

It also recently passed a new law[35] allowing its coast guard to act more like a military body and enforce maritime law — again in violation of the UN Convention on the Law of the Sea.

China is also expanding its “grey zone” warfare[36] against Taiwan, which includes cyber attacks[37], repeated incursions of its air space and territorial waters, and diplomatic isolation[38] to undermine Taiwan’s resolve and ability to resist.

Read more: Explainer: what is 'hybrid warfare' and what is meant by the 'grey zone'?[39]

This persistent and escalating challenge by Chinese forces has demonstrated Taiwan’s inability to fully control its waters and air space[40]. Beijing is continuing to build a fleet of amphibious[41] capabilities to enable an invasion of Taiwan.

US pundits are also no longer confident the Americans would win in an outright war over Taiwan, with Washington’s top military officer in the region arguing one could happen within six years[42].

Taiwan lacks allies other than the United States, but Japan is mindful of the consequences of a US failure to defend Taiwan. Its ocean surveillance and coastal defence capabilities[43] would be exposed if China took Taiwan. But Japan’s constitution precludes direct involvement in defending Taiwan[44].

Under its Anzus obligations, the US could call on Australia for military support to defend Taiwan. The mutual assistance provisions are not automatically invoked[45], but the implications of Canberra standing on the sidelines would be profound.

Warnings about rhetorical drumbeats of war remind us the US is no longer the world’s only superpower[46] and suggest Australia should prepare for a more volatile world.

Rather than rely solely on the US, Australia should bolster its own defence capabilities. At the same time, it should collaborate more with regional partners across Southeast Asia and beyond, particularly Indonesia[47], Japan, India[48] and South Korea[49], to deter further belligerence and mitigate the risk of tensions escalating into open war.