Aboriginal and Torres Strait Islander readers are advised this article contains names of people who have passed away, and descriptions of these deaths.

One year has passed since George Floyd’s death under the knee of a Minneapolis police officer. Floyd’s name is imprinted upon our consciousness, as it should be.

However, in Australia we know less about the more than 474 Indigenous people who have died in police or prison custody[1] in the 30 years since the Royal Commission into Aboriginal Deaths in Custody.

While Floyd’s death and the Black Lives Matter movement sparked extensive media attention, Australian Indigenous deaths in custody have had a harder time attracting sustained coverage, particularly from mainstream news outlets. Media attention on the issue has been episodic and too often absent.

The royal commission stated that to reduce Aboriginal deaths in custody it is critical to reduce imprisonment rates (which have doubled[3] since 1991), and to improve the exercise of the duty of care owed to people in custody.

Two Indigenous deaths in custody, 20 years apart, demonstrate the failure to achieve both.

She was admitted to prison unwell; previous open-heart surgery and other concerns were highlighted on her admittance form. She was given a cursory medical examination and her symptoms were put down to drug withdrawal. Over a week, she became weaker and sicker, received no effective medical attention and died alone in a cell.

In 2014, Yamatji woman Ms Dhu, 22, was arrested for unpaid fines, against royal commission recommendations. She was held in a South Hedland, WA, police watch house for three days in intense pain and growing sicker.

The usual assumptions were made about drug withdrawal and that she was “faking it[5]”. She died of staphylococcal septicaemia and pneumonia.

Twenty years apart, the circumstances around Ms Beetson’s and Ms Dhu’s deaths reflect the same inadequate medical treatment, inhumanity, lack of professionalism and failures. Both medical conditions were treatable and both deaths preventable.

But the story of Ms Dhu’s case broke through, due to local and effective activism, and because the media landscape had started to change.

Read more: Not criminals or passive victims: media need to reframe their representation of Aboriginal deaths in custody[6]

The year before Ms Dhu’s death, The Guardian began publishing an online Australian edition. Guardian journalist Calla Wahlquist[7] reported at least one story every day from the inquest into Ms Dhu’s death. 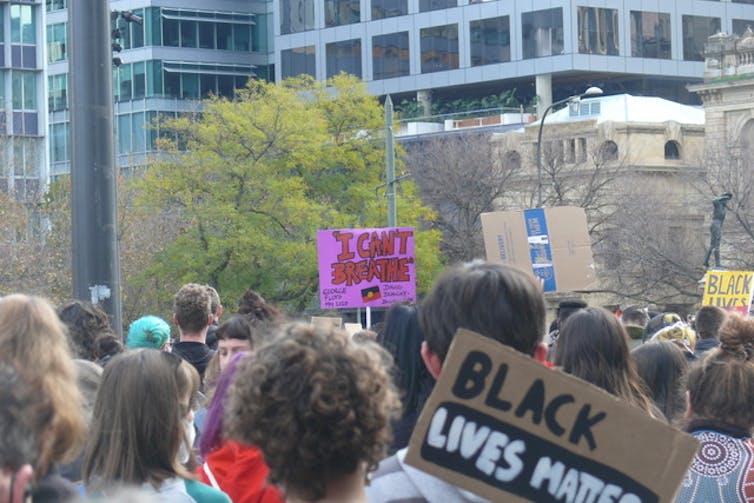 Australian journalists must report the chain of events that lead to Aboriginal deaths in custody. Provided by author, Author provided (no reuse)

Media attention was important in helping to create the conditions[9] for the royal commission’s establishment. Among the more influential and agenda-setting stories were those by Western Australian freelance journalist Jan Mayman[10] reporting on Roebourne teenager John Pat’s 1983 death for The Age, and a 1985 Four Corners program[11] presented by David Marr.

In its report and recommendations[12], the royal commission recognised the important role of the media as a form of “collective conscience”, contributing to the possibility of increased justice for Aboriginal people.

The release[13] of the royal commission’s final report was a Black-lives-just-could-matter moment in Australia.

Here was the blueprint for transforming the life chances of Aboriginal people, and the relationship between Aboriginal and non-Aboriginal Australians. Implementing the report’s 339 recommendations could reduce imprisonment rates, deaths in custody, inequality and disadvantage.

When the report[14] was released, the media was again interested and engaged[15]. Aboriginal people’s points of view were heard, and Aboriginal deaths in custody became an important story that put individual deaths into context. However, this kind of reporting soon fell away.

Four years after the report, governments were claiming successful implementation of the royal commission’s recommendations. However, the Australian Institute of Criminology[16] was reporting deaths in prison at record levels.

Research[17] by the Australian Centre for Independent Journalism found the media uncritically reported government implementation claims as if they were true.

Non-Indigenous journalists need to step up

While First Nations journalists, such as Amy McQuire, Gamilaraay and Yawalaraay woman Loreena Allam[18] and Muruwari man Allan Clarke[19], are telling stories of injustice meted out to Aboriginal people, non-Indigenous journalists must also keep telling stories about the injustices caused by colonisation.

It took an event in the US to spark the Indigenous lives matter response across Australia. Journalists must continue to report on the chain of events that lead to Black deaths at the hands of the state.

How we can do this:

We can report the facts, for instance, Indigenous adult and youth apprehension and imprisonment rates, Aboriginal youth and adult suicide rates, coronial inquest findings and recommendations.

Australia, we can do better and we must do better.

See here[22] for resources and guides for what we as journalists can do.