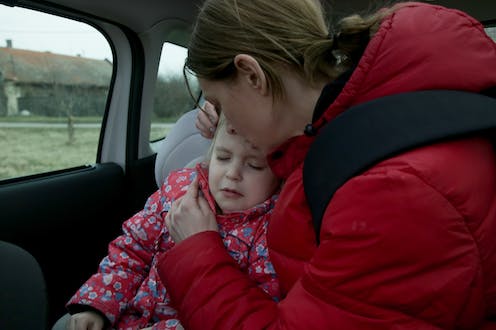 Besides the cost, most people fleeing domestic violence aren’t able to provide rental histories and credit ratings. That makes it very difficult to be accepted as a tenant.

The obvious solution is social housing – affordable rental housing provided by government or not-for-profit agencies. However, our interviews with people who fled their homes because of domestic violence revealed they had great difficulty accessing social housing.

Their marginal housing status or homelessness then contributed to some interviewees’ children being taken away. Knowing this risk, others asked extended family to care for their children until they found a secure home.

The agony of years of waiting

We run from 20 years of domestic violence and we went to a women’s shelter […] and was put on high priority. And then we were there for nearly a year and then they got cranky with me going to [Department of] Housing. Yeah, I went every day, twice a day, sometimes for a whole year. And then they gave me transitional housing and they said we’ll be there for four months. It’s nearly been a year.

She was terrified every time she went outside:

After fleeing a violent partner, Theresa and her six-year-old son were moving between friends and her uncle. She had been on the NSW housing register (waiting list) since her son was born.

Because her initial application was apparently missing some documentation (applications can be challenging[4]) Theresa was not on the priority list. People on the general waiting list can wait many years to be housed[5].

Read more: 'Getting onto the wait list is a battle in itself': insiders on what it takes to get social housing[6]

Theresa finally got onto the priority list in 2020. But she is still waiting.

Theresa was approved for the NSW RentStart program[7], which supports people in the private rental market. However, our interviewees told us it was nearly impossible to find a property and be approved by the landlord or agent. As Theresa said:

I had no success with [RentStart] at all […] I think it’s almost impossible […] There’s just nothing out here like housing-wise, rental market-wise.

Interviewees lived in fear of their children being taken into care because of their lack of secure housing. Jen told us:

Now because of all the instability DOCS [Department of Community Services, now called Department of Communities and Justice] has removed them from my care because I was, I guess, somebody who suffered from domestic violence on a regular basis. So I had issues with my ex finding them and then it’d start all over again. So in the last three months I’ve had my [two] children removed from my care because I’m waiting for a house, a safe house […]

I just feel so saddened by the whole process. I just want to hide […] I’ve had DCJ just rip my life apart pretty much as well as being homeless.

She alleged Housing NSW had never offered her permanent housing despite being on the waiting list for seven years and having periods of homelessness:

I’ve been homeless three times with children. It’s the worst. I live out of a car basically – that’s if I’ve had one at the time […] I’ve had a car on two occasions. The children become very unsettled.

In between, Jen has had temporary accommodation. Although a step up from sleeping in her car, she felt it contributed to her children being removed.

We could be going hotel to hotel. They could just move us in a whole new area completely […] They actually put me into an area where there’s a lot of disadvantage and my children’s behaviour slid down even worse […] to the point where I wasn’t able to control them anymore. […] Just what got DOCS, DCJ involved. So it’s been a horrible domino cycle.

Kylie also had a real fear of losing her child:

I didn’t choose to be homeless and then I had the fear like they [Housing Department] were going to call child protection service on me for no reason. I looked after my son completely. He was my world. I would do anything for him and because I went there for a little bit of help I was threatened with they’re going to call child protection services on me because I can’t find a stable home.

Some interviewees relied on relatives, usually their mothers, to look after their children. Josie had three children.

I left with the kids and ended up homeless with them, and I couldn’t have them on the street because that’s not what kids deserve […] I just sent them to mum, thinking that was the best thing for me to do, which it was.

Read more: 'All these people with lived experience are not being heard': what family violence survivors want policy makers to know[8]

Secure housing can turn lives around

All of the women were adamant that secure social housing would transform their lives. As Kylie said:

[A] stable place, you know, can bring so many opportunities […] for someone to get a better quality of life [they need] stable accommodation.

That people fleeing violence languish in unacceptable conditions for months or even years is a sad indictment of our social housing system. Mothers and children who are forced apart to manage the risks of both violence and homelessness are likely to suffer lasting trauma.

Prompt access to affordable long-term housing could pave the way for women and children to recover and flourish together. Instead of investing in high-cost practices[9] of family separation and child removal, let’s invest in secure, affordable housing.

The Albanese government has pledged[10] to set aside a proportion of new social housing for survivors of domestic violence. State governments have also announced[11] various[12] initiatives[13]. It remains to be seen if these can satisfy the growing demand[14].

* All names are pseudonyms and details may be slightly changed to ensure confidentiality and protect the individuals.