With COVID-19 causing extraordinarily intrusive and expensive lockdowns, vaccine “passports” or certificates are increasingly seen as key to getting out of them. Decision-makers and gatekeepers – from border guards to maître d’s – will have a means of knowing who can safely engage with others.

To that end, the New Zealand government aims to have one in place by year’s end[1]. But vaccine passports have also prompted riots and protests overseas[2], and there are as yet unanswered questions about their use domestically.

Furthermore, these inequalities track familiar and ethically troubling fault lines: New Zealand has struggled to lift[3] Māori vaccination rates to match those of European New Zealanders, though Māori are more at risk.

And vaccine passports could compound existing inequalities, as those with them return to work and other activities while those without remain trapped. 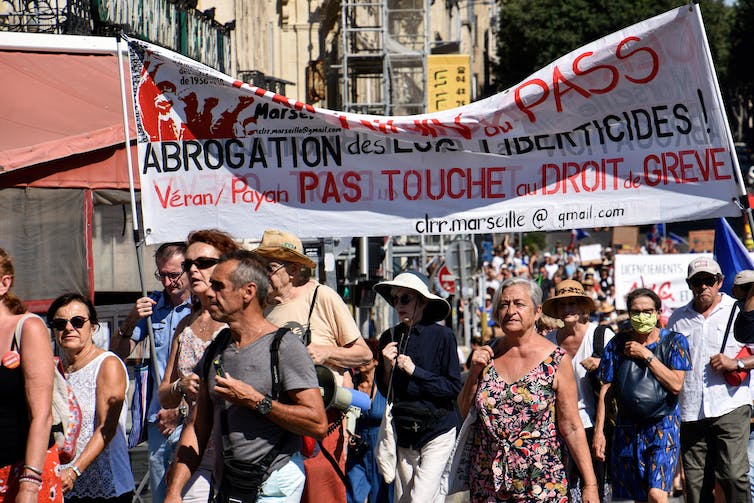 A recent protest in Marseilles, France, against the introduction of mandatory vaccination certificates. GettyImages

But there are reasons to think these legitimate concerns don’t automatically mean vaccine passports are unethical.

Firstly, the need to contain COVID-19 justifies the significant restrictions of important liberties in lockdowns. But to the extent that vaccines work, that justification doesn’t apply to someone who has been vaccinated. The justification for curtailing liberties has gone (or at least, given the possibility of breakthrough cases, been considerably weakened), so for the vaccinated the curtailment should go too.

Secondly, distinguishing between people on the basis of their COVID immunity may be discrimination, but it’s not obvious it is unjustified discrimination.

Read more: Vaccine passports are coming to Australia. How will they work and what will you need them for?[4]

Whether someone is vaccinated or not is arguably legitimate grounds for discrimination. The unvaccinated (for whatever reason) pose a greater risk to others than the vaccinated. They are also more likely to suffer severe symptoms if they get COVID-19.

Thirdly, one reason to tolerate inequality is that sometimes it improves the position of the disadvantaged. We might tolerate doctors’ high incomes, for example, if the promise of a higher income led people to study medicine and we believed a good supply of doctors benefited the worst-off members of our community.

Vaccine passports might work the same way. They help get the economy going, so the government can support those still locked down. They’re also an incentive to vaccinate, and high vaccination rates are good for everyone — perhaps especially the unvaccinated.

An offer you can’t refuse

But the use of vaccine passports as incentives poses some real issues. How they are used is crucial. Under some proposals, vaccination passports are (like conventional passports) essentially another international travel document.

Increasingly, however, countries (including New Zealand potentially) are proposing their use to control access[5] to a significant range of domestic activities, such as returning to work in person, dining out or going to concerts and sports events.

Read more: Do vaccination passports take away freedoms? It depends on how you frame the question[6]

In this context, it’s clear some incentives can be coercive: they might be an offer you can’t refuse.

There are some people desperate to travel overseas, perhaps for good family reasons. But most of us can still decide whether the incentive of the IATA Travel Pass[7] is enough to motivate us to travel.

Many people, though, will simply not be in a position to refuse the incentive of a domestic vaccine passport. Getting back to work and a pre-COVID life will not be a discretionary matter. For them, domestic vaccination passports are likely to be coercive.

For now at least, the government insists vaccination will not be mandatory. But effectively it will be for those who have no choice but to get a vaccine passport to work or have access to non-discretionary domestic activities.

And that coercion will not apply equally. There will be much greater pressure on those who are already socially disadvantaged and less able to make a genuine choice.

Coercion is sometimes justified, and perhaps the threat posed by COVID-19 warrants it. However, we should be wary of accepting kinds of coercion that are discriminatory and inegalitarian.

Governments need to be clear

So what should we do about vaccine passports and vaccine incentives?

We could restrict them to more discretionary activities, such as international travel, concerts and restaurants. That would be an offer anyone could refuse, especially the already disadvantaged.

But this use of passports might be insufficient incentive — too many people might refuse to get one. That’s a problem if we think trying to increase vaccination rates is justified.

So we think governments have a choice: they should address concerns about vaccine passports by avoiding uses that are coercive, discriminatory and inegalitarian. Alternatively, they should acknowledge their position that COVID-19 justifies coercion, and make vaccination mandatory.

The second option would be less discriminatory, and seems less likely to threaten trust and co-operation than the surreptitious and uneven compulsion provided by wide-ranging requirements for domestic vaccine passports.