Since 2018, we have tracked public perceptions of the leadership of various Australian institutions — including government — as part of our Australian Leadership Index[1].

Before the COVID-19 pandemic worsened in Australia in March, public perceptions of the federal and state governments were consistently poor. Political leaders were seen to be serving themselves and other vested interests, rather than the public interest.

However, since the start of the pandemic and the establishment of the National Cabinet in March, this has begun to change[2].

We collected data at three points during the pandemic — March, June and September. And for the first time since our data collection began in 2018, a majority of people said they felt the federal and state governments were exhibiting leadership for the greater good. 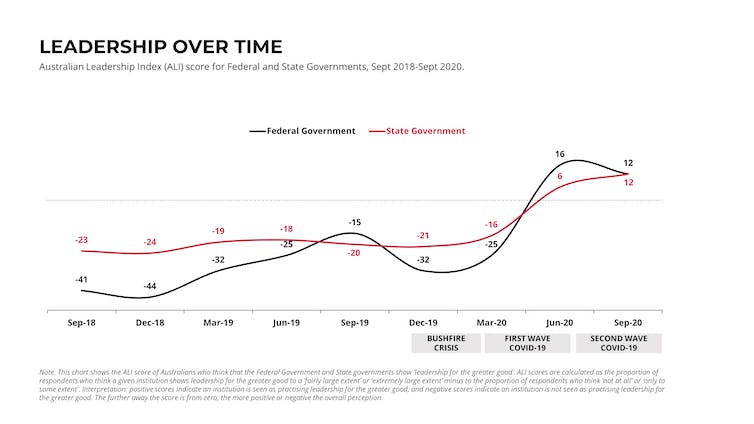 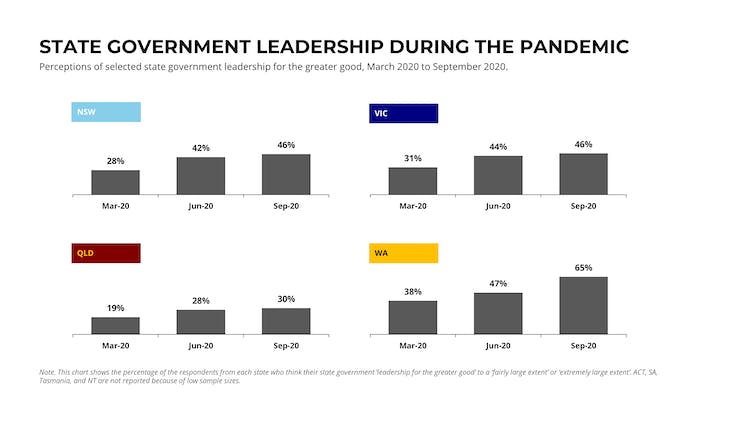 Author provided These findings are consistent with other surveys — Newspoll[3] and Vox Pop Labs/ABC[4] — from the first wave of the pandemic. However, perhaps no other leader in the country has been under greater scrutiny than Victorian Premier Daniel Andrews. Unlike other states, Victoria’s numbers were relatively static from June to September during the state’s harsh second lockdown. In June, 44% of respondents said they believed the Andrews’s government was displaying a high degree of leadership for the greater good, and this modestly improved to 46% in September. This could be seen as an unexpectedly good result in the context of the hotel quarantine debacle and the prolonged lockdown. Andrews’s government was not nearly as popular as McGowan’s in our surveys, but it has tracked quite closely to NSW Premier Gladys Berejiklian’s government from March through September, and ahead of the Queensland government. 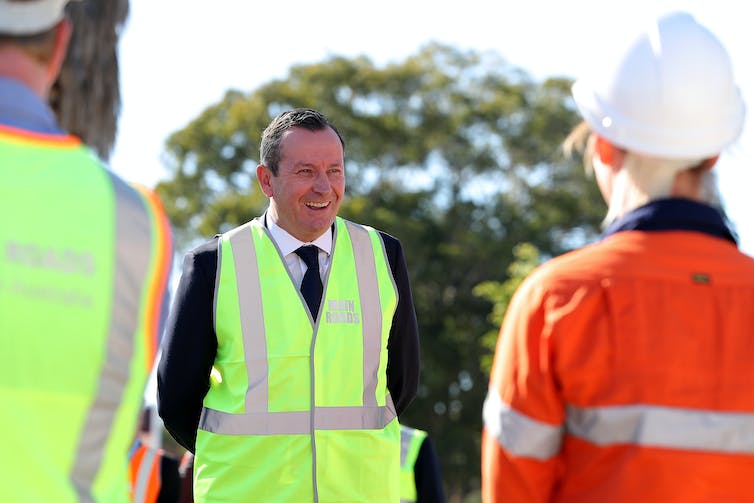 Closed borders and a budget surplus have helped buoy McGowan’s popularity in WA. Richard Wainwright/AAP Read more: Andrews under fire: why an activist premier's greatest challenges may yet lie ahead[5] A tale of two states Given the markedly different experience of Victoria and NSW residents during the pandemic, it is instructive to compare public perceptions of both governments’ leadership. According to the model[6] that underpins the Australian Leadership Index, the public regards an institution as leading for the greater good when it creates social, environmental and economic value for the whole of society in a way that is transparent, accountable and ethical. At least, this is how people judge leadership in normal times. Read more: How the coronavirus pandemic is (finally) resulting in leadership for the greater good[7] Among NSW residents, there were some changes in the factors that underpinned perceptions of state government leadership through the pandemic. Transparency became increasingly important, for instance, while balancing the interests of different stakeholders became less so. There was also a shift in what people felt was needed most by society. In March and June, respondents said good leadership involved creating positive social outcomes for people, but in September, this shifted to creating positive economic outcomes. 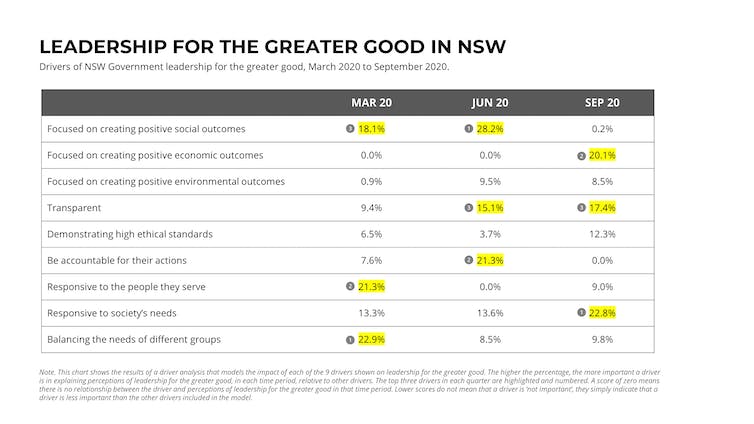 Author provided By contrast, among Victorians, there was a marked shift how people viewed good leadership from the first wave (March-June) to the second wave (June-September). During the first wave, Victorians thought leadership for the common good was served by balancing the needs of different groups and focusing on the creation of positive social outcomes. By September, however, far more people were concerned about the ethical standards of the government and its accountability. 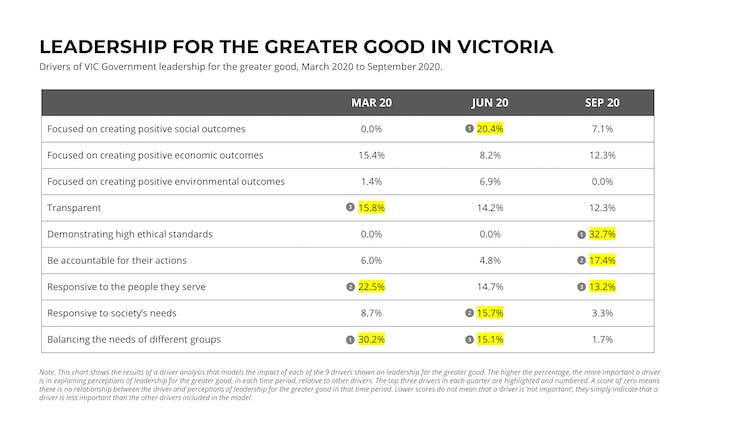 Author provided Will people continue to rate state governments highly? Despite the furious debate taking place in the media about personal freedoms and the proportionality of government measures to control the pandemic, at the community level, there appears to have been a more settled attitude[8] to the reality of living in a COVID-19 world. However, there are signs the public mood is turning and politics-as-usual is returning. State premiers are faltering. Federal and state government solidarity is ebbing away. None of this bodes well for community perceptions of government leadership. Although leadership for the greater good is a complex, evolving phenomenon, people know it when they see it. Let us hope that political leaders have the moral conviction and imagination to sustain it. Read more: Tensions rise on coronavirus handling as the media take control of the accountability narrative[9]