For many years, surveys indicated declining Australian trust in government. Not anymore.

On the 2021 Edelman Trust Barometer[1], which measures average trust in NGOs, business, government and the media, trust in Australia rose dramatically in 2020. In fieldwork conducted October 19 to November 18 2020, Australia climbed by 12 points, from 47% to 59%, the greatest increase in trust in any country measured.

Among those Edelman calls the “informed public” (200 out of 1150 surveyed), Australia stands at 77%, or eighth. But the figure for the general population, which excludes the “informed public”, is 55%. This 22 point gap – somewhat higher than the global average of 16 – is the largest among the countries considered, suggesting notable differences in levels of trust in the community, according to education, income and engagement with current affairs. (The survey, for some reason, only includes people aged 25 to 64 in this category, so it also contains age biases against the elderly in deciding who is “informed”.)

Trust in government climbed even more dramatically, by 17 points to 61%. Australia is ranked ninth, whereas in past years it occupied the middle of the pack of 27 countries, but among those where government is distrusted (below 50%). To place this in perspective, Britain is now at 45% (up nine points) and the United States at 42% (up three). We are now slightly more trusting than Germans and Canadians, but less so than the Malaysians and the Dutch. China and Saudi Arabia head the pack, but China is down eight points from last time.

The Australian results are in line with other surveys. Democracy 2025[3] (based at the Museum of Australian Democracy and University of Canberra) had trust in the federal government soaring from 29% to 54% in its May-June 2020 survey, with support for Prime Minister Scott Morrison’s handling of the pandemic at 73%. This is significantly higher than for Britain, the United States and Italy – unsurprising given the much lighter impact of COVID-19 in Australia.

The Scanlon Foundation’s 2021 research[4] also showed trust in both state and federal governments rising. Trust in Canberra to “do the right thing” is 55%, compared with an average since 2007 (when the survey began) of 32%. Moreover, results for July and November 2020 were broadly consistent. Support for the federal government pandemic response was 85%, with some state governments climbing even higher (to an extraordinary 99% in Western Australia in July, and 98% in November). Even in Victoria, while support was at 65% mid-year, it was 78% by November. 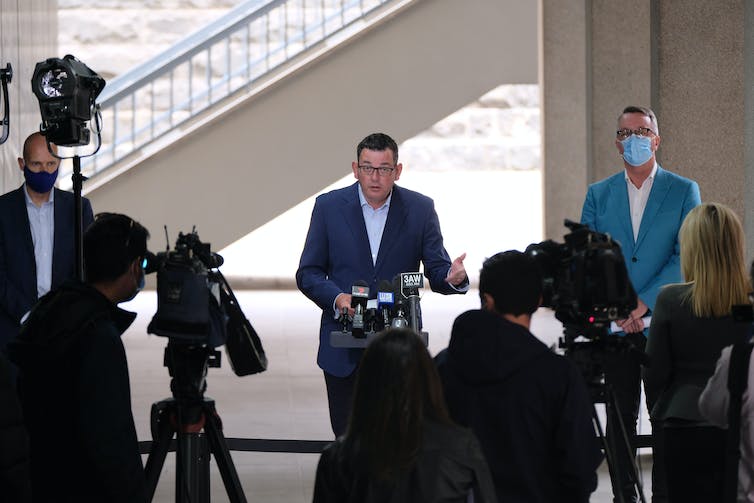 State governments’ approval ratings have been high, even in Victoria which has borne the brunt of virus outbreaks. AAP/Luis Ascui

What does this mean? Firstly, we can assume much of the grumbling about federal and state government handling of the pandemic - even with another Victorian lockdown entering its frustrating second week - does not reflect majority disaffection with those responsible. That does not mean Australians have not sometimes been exasperated and angry. Nor does it suggest decision-making has been perfect. If governments have pursued the utilitarian ethic of the greatest good for the greatest number, they might – indeed have – at times have been negligent and even callous concerning some minorities. They also seem to have gone out of their way further to enrich those usually found at the front of the queue when taxpayer money is being thrown around.

We have learned that governments give priority to “Australia” – understood as a land mass and its citizens (and perhaps permanent residents) – over “Australians”, understood as a people who might be found anywhere from Melbourne to Minsk. Many Australians stuck overseas felt abandoned. Some discovered that their citizenship and passport could not stop the federal government from keeping them out of the country, and even threatening them with prison if they tried coming home. This has been a revelation to many of us, a light-bulb bright enough to illuminate thinking on both the left and right. Many disliked what they saw.

Read more: COVID has made one thing very clear — we do not know enough about Australians overseas[5]

Similarly, people working or studying in Australia on one of the numerous visas made available for such activities quickly found themselves surplus to requirements. Morrison told them they should go home. Students were treated as you might an empty ATM. Foreign workers, no longer needed in an economy shutting down, were like mobile phones out of charge, range and credit. Later, when fruit-growers complained their usual supply of seasonal labour was not flowing, there was a great deal of hand-wringing, and a ramping up of the usual angry talk of the unemployed refusing work.

Australians like to think of themselves as an egalitarian people, but the pandemic has underlined that as in George Orwell’s Animal Farm, some are more equal than others. Celebrities and the super-rich came and went[6] as if it were still 2019, permitted to quarantine at home when they arrived while everyone else went into a hotel room. Some commentators were brazen in their views about the dispensability of the old and frail when there was an economy to run. Government did not follow their lead, but vulnerable people living in nursing homes still seemed too far down anyone’s order of priorities when it came to acting rather than talking. 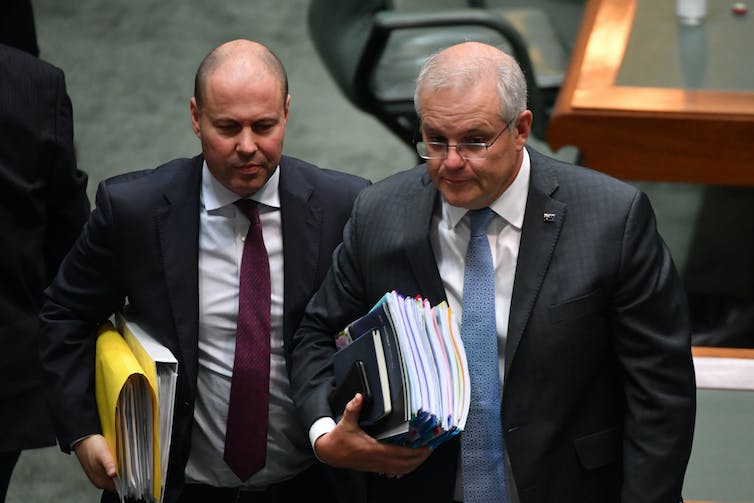 When it comes to federal government support through the pandemic, some Australians have been more equal than others. AAP/Mick Tsikas

Casual workers were seen to have little call on the state for support; they were treated as de facto unemployed, not workers temporarily unable to do their jobs. The unemployed themselves gained more support for as long as it suited the federal government’s macroeconomic goals of propping up an economy falling into recession. Then, they were returned to their customary place under the poverty line. The industries dominated by women received less consideration than those largely made up of men, especially men in high-vis vests. Even when the government announced modest financial assistance for the arts, Morrison couched it[7] as a way of keeping tradies employed.

It’s difficult to know what Australians think of their prime minister after more than a year of a pandemic. His approval rating remains buoyant, but has dropped during those times – the bushfire, and then the sexual assault crisis – when his judgment and empathy have been found most wanting. He’s capable of great callousness, and addicted to publicity and marketing over substance and results. I suspect many Australians don’t quite trust Morrison to find the right way of responding to crises and challenges. But they seem willing to stick by him until something better is on offer, a common enough attitude in the two-horse race that federal politics remains.

The failures of his government on both quarantine and vaccination are problems for Morrison, and may well be reflected in future movements in those trust surveys. The pandemic has exposed many of the frailties of federal government, and a few in the states as well. Canberra has well-developed instruments for transfer payments – which it deployed in JobKeeper and JobSeeker – but its capacity for service-delivery in a wider sense is strikingly limited.

Medical experts have been criticising the inadequacies state government-run hotel quarantine system for months, but until the very recent past, the federal government has resisted acting tooth and nail despite its constitutional responsibilities. 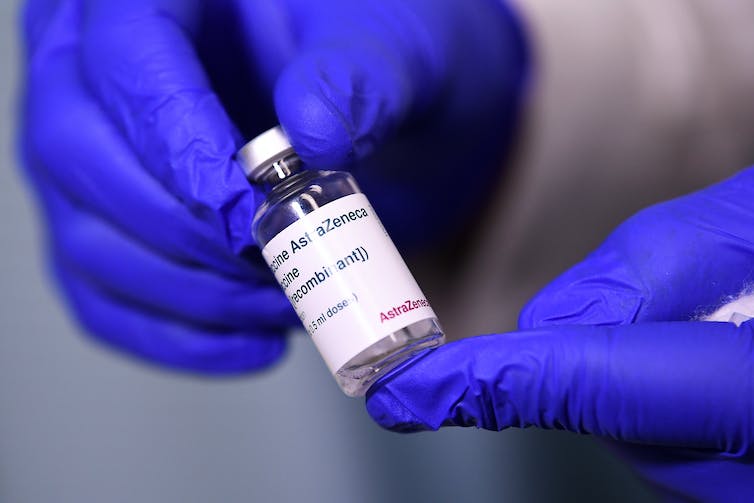 The vaccine rollout has been a disaster by any measure, but whether Australians will punish the Morrison government for it remains to be seen. AAP/James Ross

Its vaccination program has been disastrous by any reasonable measure. Federal government failures in relation to its aged-care responsibilities, which contributed to the loss of life earlier in the pandemic, have been repeated. People with disabilities have been reminded of their lowly status in the pecking order.

The lucky country has been lucky during COVID that it is an island. It has been lucky that its federal system often saved its people from the poor judgement and callousness of individual leaders. But it has been lucky, above all, in its people’s notable discipline – a trait rarely associated with the typical Australian.

Despite the inevitable grumbles, government excesses, opportunistic posturing of this and that politician, a likely increase in racist bullying, and the odd protest from sovereign citizens and others – the existence of this surprisingly wide and deep well of social discipline is by far the most important thing that we’ve learned about Australians in the age of COVID.

Read more: An obedient nation of larrikins: why Victorians are not revolting[9]