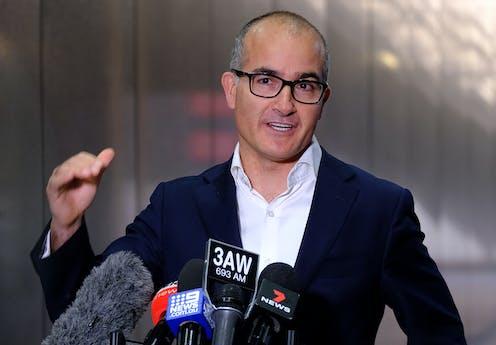 This poll was presumably conducted at the same time as Resolve’s federal May and June polls, from a sample of 1,103. As usual with Resolve polls, no two party figure was provided, but The Poll Bludger[2] estimated 53-47 to Labor, about a 4% swing to the Coalition since the election.

The Age is comparing the Victorian ratings with the ratings for NSW premier Gladys Berejiklian in May’s NSW Resolve poll. Berejiklian was at a net +33 (51% positive, 17% negative).

It’s likely that the 2018 election landslide was a high water mark for Labor in Victoria, and that they would fall from that position even with better perception of handling of COVID. However, Labor is still comfortably ahead and the clear favourites for the November 2022 election.

No two party vote was provided, but The Poll Bludger[6] estimated a 50.5-49.5 lead for Labor from these primaries, a 0.5% gain for the Coalition.

The problem with the second question is that voters were given a choice between something that sounds free (new tech), and something that has a cost (carbon price). It is completely unsurprising, given this framing, that voters massively prefer new tech. A better framing would be to ask whether the government should invest money in new tech, or put a price on carbon.

However, voters are reluctant to spend money on emissions reduction. In a February 2020 Newspoll[8], 50% said they were prepared to pay nothing more on electricity to meet emissions targets, and a further 23% just $100 more a year. This poll was taken after the 2019-20 summer bushfires, and before COVID. Voters are unlikely to be so concerned about climate change now.

In other Resolve questions, Scott Morrison had a 48% good, 41% poor rating for his performance in recent weeks, with his +7 net rating down eight points[9] since May. Anthony Albanese had an unchanged -13 net rating, and Morrison led Albanese by 46-23 as preferred PM (48-25 in May).

Read more: Has a backlash against political correctness made sexual misbehaviour more acceptable?[10]

Netanyahu ousted in Israel, and other international politics

I wrote for The Poll Bludger[12] on Monday that Israeli Prime Minister Benjamin Netanyahu had been ousted in a confidence vote, ending his 12 successive years as PM. Also covered: a German state election and federal polls ahead of the September 26 election; two UK byelections that occur in the next fortnight; and the far-left’s narrow win over the far-right in Peru.