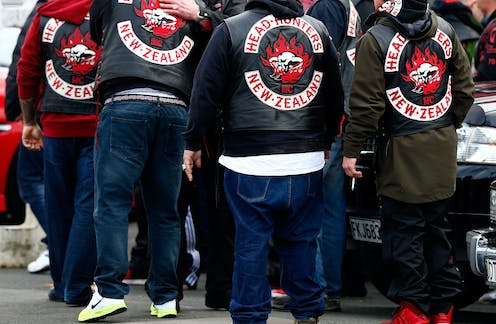 The concern about gangs and gang-related violence in New Zealand continues to be highly politicised[1]. Government ministers are under constant media scrutiny and political pressure, with both sides trying to look more staunch on crime than the other. The problem is that these debates often lack history, context or vision.

Every generation panics intermittently about crime, especially when it concerns gangs and youth. One of the earliest New Zealand examples was in 1842 when 123 male juveniles who had been transported from Parkhurst Prison[2] in England began roaming the streets of Auckland.

Although a plea by the head of police for a prohibition on further deportations was accepted, the country realised it had a problem.

The following years saw the introduction of new legislation, such as that designed to deal with “vagabonds and rogues”[3] (including the particularly troublesome “incorrigible” ones). This overlapped with generic laws designed to protect public order and keep criminals locked up.

Crime did not stop, but it did evolve. It was recognised as “organised” in the 1920s, well before the first post-WWII counterculture emerged. But the country was so shocked by youth behaviour in the 1950s that a dedicated committee on “Moral Delinquency in Children and Adolescents[4]” was established. Its findings on the sexual morality of teenagers were posted to every home in the land.

It was not a huge success. By the late 1950s there were around 41 “milkbar cowboy” gangs in Auckland and 17 in Wellington. By the early 1960s, more enduring brands like the Mongrel Mob and a New Zealand chapter of the Hells Angels were beginning to put down roots.

Six decades of a growing challenge

Since then, politicians have swung left and right, wielding sticks and then carrots to deal with the issue. As we examine in our recent book, People, Power, and Law: a New Zealand History[5], government responses have moved from involving isolated ministries towards multiple overlapping agencies approaching the problem strategically and holistically.

There has also been a plethora of legislation. As well as the continually evolving criminal law, there have been laws on everything from fortified houses and the recovery of criminal proceeds, through to the prohibition of gang patches in public spaces.

Read more: Despite claims NZ's policing is too 'woke', crime rates are largely static — and even declining[6]

Gang members are over-represented in crime statistics. As of mid-2021, 2,938 people in prison[10] had a gang affiliation – approximately 35% of the prison population.

In many ways, these people have joined gangs for similar reasons the Parkhurst boys got together in the early 1840s: alienation, identity, purpose, respect, friendship, excitement, security and even economic opportunity.

Read more: How coronavirus is changing the market for illegal drugs[11]

But today’s gangs are not the same. Their scale, methods[12] and social impact (especially overseas[13]) have all changed. They’ve become mobile, transnational enterprises worth an estimated 1.5% of global GDP[14].

The ever-expanding[15] global supply and demand for illegal narcotics has impacts everywhere. Although New Zealand Customs’ illegal drug take was down during the pandemic[16], the overall trend is one of growing seizures and a diversity of offshore suppliers.

Read more: If reducing harm to society is the goal, a cost-benefit analysis shows cannabis prohibition has failed[17]

Drugs are obviously attractive to gangs. In the first quarter of 2021[18], methamphetamine, MDMA and cocaine netted an estimated NZ$77 million through illegal distribution.

The previous quarter was even higher, with about $8.5 million generated[19] every week. The estimated 74 tonnes of cannabis consumed in New Zealand each year may add up to $1.5 billion[20] to the total.

Solving a problem of this scale will require a strategic shift away from treating organised criminal groups like a partisan political game. It’s an intergenerational challenge that should ideally be a cross-party issue.

One way to achieve this would be through a new framework law that encourages whichever government is in power to focus consistently on illegal activity by organised groups. It should begin with a detailed review of what has worked and what has failed legally, socially and culturally.

There would then need to be an agreed system of political accountability set against known and transparent targets and indicators. But laws and policies designed to deter and punish criminal activity must also be seen in a wider context.

Read more: Policing by consent is not ‘woke’ — it is fundamental to a democratic society[21]

The law does not exist in a vacuum. The rights of victims of organised crime should be measurably enhanced. And the rights of freedom of association and freedom from discrimination due to group identity need to be reconciled.

We also need to accept that gangs will not simply disappear. Areas for co-operation on shared lawful projects should be found. Helping people safely leave organised criminal organisations would be another priority.

Perhaps the most critical aim of all will be to slow gang recruitment. Of course, that is a fundamental challenge well beyond any single policy or program – to create an inclusive society where the pathways, opportunities and benefits of being a lawful citizen outweigh the alternative.