US private equity firm Bain Capital won’t formally assume control of Virgin Australia until November. But its coup this week[1] against chief executive Paul Scurrah, dumping him for Jayne Hrdlicka, a former Bain employee with a reputation for toughness, signals the start of a classic private equity smash-and-grab operation.

When Virgin’s administrators and creditors formally accepted Bain’s bid for the stricken airline, they did so in part due to undertakings job losses would be minimised. Administrator Vaughan Strawbridge optimistically said in September[2] the deal would provide “certainty for employees and customers” as well as “maintaining a competitive Australian aviation industry for the benefit of consumers”.

Now, just weeks later, Scurrah’s exit indicates Bain’s intentions. He was reportedly reluctant[3] to undertake the cost-cutting Bain wants as part of a plan to position Virgin Australia between Qantas and its budget carrier Jetstar.

Hrdlicka spent about 15 years working for Bain in both the US and Australia. She joined Qantas as a senior executive in 2010, where she reportedly gained a reputation for being tough on unions[4]. She was appointed group chief executive of Jetstar in 2012 (a position she held until 2017).

Replacing the existing boss with a hand-picked replacement is standard practice in private equity deals. It is one of the most important strategic decisions (and typically the first) a private equity owner makes.

As such, the choice says a great deal about what an owner hopes to achieve, and how it plans to achieve it.

In contrast to the chief executive of a public company (the shares of which are traded on a stock exchange) who must act on behalf of a multitude of shareholders, the head of a private-equity company answers solely to the private equity owners.

This relationship, therefore, is an intensely personal one, with private-equity partners being very “hands-on” owners. 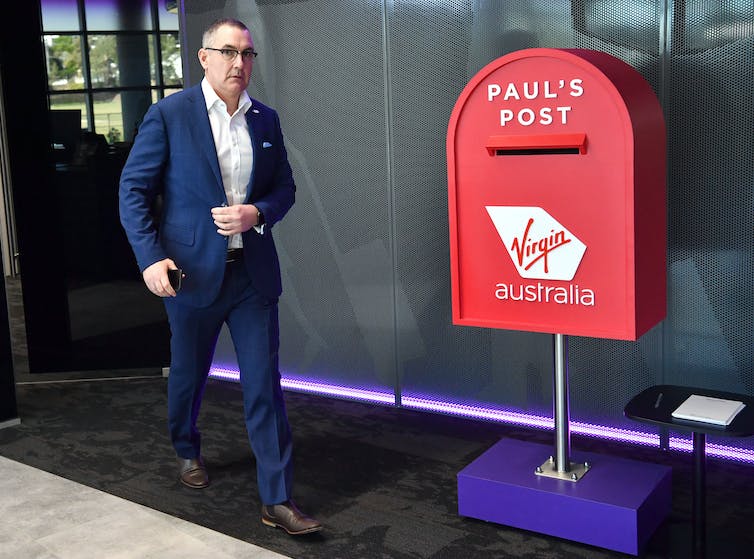 What are the qualities private-equity owners look for in a chief executive?

According to researchers who interviewed 32 managing partners of private-equity firms to find out what they valued, a handful of key[5] qualities are particularly sought after.

They want candidates with a track record in overcoming setbacks, who are team builders, and who won’t shy away from telling their bosses (the private equity firm) how things are. Previous experience is less important. So too is empathy. As one interviewee told them:

I’m not down on empathy, but there are times when empathy needs to take a back seat to urgency. Some highly empathetic leaders are not able to make the tough personnel decisions that need to be made - which compromises performance.

In this vein, Bain’s jettisoning of Scurrah for Hrdlicka is highly suggestive of the management approach Bain would like to see.

Among other things, it is likely to involve a more combative approach to employee relations with a view to aggressively, and quickly, driving down Virgin’s cost base.

Scurrah’s dumping has already reportedly led to the Transport Workers Union (representing the biggest proportion of Virgin Australia employees) suspending negotiations with management[6]. Unions had reportedly been assured months ago[7] Hrdlicka would not be made chief executive.

Yesterday, Virgin’s administrator Vaughan Strawbridge again (somewhat optimistically) “reaffirmed[8]” that “Virgin Australia will not be repositioned as a low-cost airline”:

Virgin Australia will be a ‘hybrid’ airline, delivering high value to its customers by delivering a distinctive Virgin experience at competitive prices.

But Bain’s dumping of Scurrah for Hrdlicka fits the classic narrative of how private-equity players squeeze money for themselves out of takeover targets before bailing out before those companies nose-dive.

As I wrote[9] after Virgin Australia’s August announcement that it would axe its budget brand Tigerair and sack about 3,000 of its 9,000 staff:

Private-equity owners have a poor track record in creating strong, sustainable companies with long-term prospects. At their worst they can act a bit like used-car salesmen who know how to spruce up and turn a profit on a vehicle with underlying mechanical problems.

If the typical private-equity experience is anything to go by, Bain, having acquired Virgin with mostly borrowed money, will seek to maximise cash flow by operating only high-margin, high-volume routes (consistent with servicing “premium corporate” and “budget-focused” travellers). It will abandon other low-margin, mostly regional routes to the vagaries of the Qantas monopoly.

Read more: Cutbacks may keep Virgin Australia alive for now, but its long-term prospects are bleak[10]

Bain will also likely seek to reduce staffing costs through renegotiating pilot and cabin-crew employment contracts, using the threat of further redundancies as leverage. On the most popular trunk routes, where it will provide a parallel service to Qantas, customers will face cosy duopoly prices.

The upshot of all this: to allow Bain and its co-investors to pay themselves handsome dividends upfront, thereby facilitating an exit at the earliest opportunity at a tidy profit. This would be a classic debt-fuelled private-equity play.

In public-interest terms, however, it will be a costly missed opportunity to build a robust long-term domestic competitor to Qantas.

Read more: 'Home away from home': reflecting on past airline collapses in Australia[11]

Inevitably, once the private equiteers have left the building, a once-proud airline will be left labouring under a mountain of debt, marking time until it capitulates at the onset of the next economic crisis; the unfortunate plaything of financial, not aeronautical, engineers.