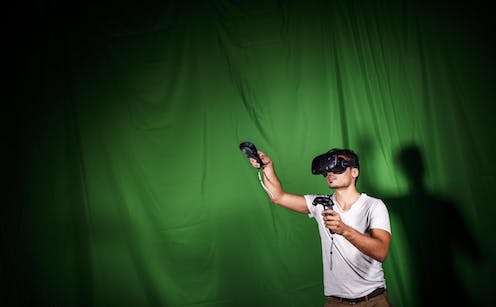 There has been considerable excitement about this, with claims the virtual reality experience is an “empathy machine[2]” that enhances the perpetrator’s ability to empathise with a victim’s fear.

As Australia grapples with its own domestic violence crisis[3], overseas companies are making noises[4] about using the technology here.

Read more: Not all men's violence prevention programs are effective: why women's voices need to be included[5]

In our new book Virtual Realities[6], we explain the need to be sceptical of claims about what virtual reality can do for social and psychological problems, including domestic violence.

What will the trial do?

The French trial will involve 30 men serving sentences, or on parole, for domestic violence. They will be volunteers, wear a virtual reality headset and watch 12-minute, 360-degree videos.

They will encounter a range of dramatised domestic abuse scenarios involving a male and female couple and later, their infant child. One example released by the French government shows a man who shouts abuse and points a knife menacingly at the camera (as seen in the tweet below).

Other sample clips show the man threatening and assaulting his female partner. This is then supposed to trigger empathy in the perpetrators.

Why we need to boost empathy

Enhancing empathy is important because violent offenders have been shown to have lower levels[7] of what is known as “cognitive empathy” than non-offenders. This is the capacity to see a situation from another person’s perspective and understand their emotions.

This is different from “emotional empathy”, which is the ability to sense other people’s emotions. It does not mean[8] you necessarily share that emotion, or understand why the person is feeling it.

Read more: National summits have their place — but what will it really take to achieve equality for Australian women?[9]

In the French trial, which follows similar work in Spain and the Netherlands[10], it is hypothesised violent offenders will show improved levels of empathy with victims after the virtual reality experience. This will in turn lead to less recidivism.

The French Ministry of Justice says[11] the 360-degree nature of virtual reality — as opposed to simply watching TV or a movie — can “trick the brain into believing that the perpetrator is immersed in this reality”.

It is unclear what if anything else the offenders will do as part of the study, or how the trial’s effectiveness will be measured.

The growing buzz around virtual reality

In 2016, relatively low cost (though clunky) headsets came on the market[12], making virtual reality a more mainstream technology. Since then, virtual reality has increasingly been suggested as a digital panacea for a range of psycho-social issues.

This includes fears of things like heights and spiders[13] and post-traumatic stress disorder[14] in veterans. The capacity of 360-degree video to bring diverse environments to life is also being used to try to enhance cultural understanding[15] and explore social issues such as racism[16].

Virtual reality is not just being used for gaming and entertainment but to try and solve complex issues like phobias and discrimination. John Locher/AP/AAP

While many of these uses have been innovative and exciting, it’s important to maintain a critical perspective. For one thing, it is no longer useful to label virtual reality a “novel” or “experimental” technology: much is now known[17] about what it can and can’t do.

What does the research say?

Virtual reality has been found to elicit strong emotional reactions – especially those linked to the user’s own fear and anxiety[18]. Some studies[19] have also shown to a limited extent virtual reality programs can increase “prosocial behaviour” (behaviour that helps others).

However, studies have also demonstrated virtual reality is not successful when it comes to the longer-term cognitive empathy the French trial is supposed to generate. Using both theoretical[20] and empirical research[21], these studies have challenged many techno-evangelical ideas about virtual reality.

This year, an academic review[23] of 43 studies into virtual reality and empathy found across the 5,644 participants, cognitive empathy was not enhanced to any significant degree. Other studies have also challenged virtual reality’s capacity to lead to behaviour change. Another 2020 review of studies[24] found “statistically significant positive changes in perspective-taking” but not in empathy.

Findings from a 2018 study[25] specifically looking at domestic violence reported some success in boosting cognitive empathy, however the researchers acknowledge that more research is needed. Importantly, this study used an entirely different type of virtual reality experience than what has been showcased in the French trial.

What are you looking at?

Another key piece of research to consider involves eye-tracking. One of the most important findings of this research[26] is although virtual reality viewers are “free” to look at whatever they choose, they typically follow the same attention patterns as traditional screen viewers.

This means their attention will likely be drawn to movement and whichever character is talking. This has been shown to prevent audiences of virtual reality videos noticing other characters’ non-verbal responses, which are crucial to understanding the events depicted.

The Macron government has faced public pressure to do more to stop domestic violence, which has been described as ‘France’s shame’. Thibault Camus/AP/AAP

In the French trial, users will be able to view the scenario from the perspective of the victim, the child bystander and the perpetrator. Therefore, we would expect those in the trial to pay attention almost entirely to the perpetrator on show — he is principally the one moving, talking and yelling.

To the limited extent[27] virtual reality can elicit any empathy – a claim that is challenged so compellingly[28] by the research – a viewer may only feel empathy in relation to what they are looking at.

The viewer of the domestic violence project will be a violent offender, who is likely to pay greater attention to the violent character in the virtual scenario. How will this prompt empathy in relation to the other characters’ (unseen) non-verbal displays of fear?

We know virtual reality companies can see a market[29] for their domestic violence programs in Australia. It seems one of the limitations for its uptake to date has been the high cost of the headsets, although an appropriate virtual reality device is now available for under A$500.

Read more: QLD police will use AI to 'predict' domestic violence before it happens. Beware the unintended consequences[30]

As we argue in Virtual Realities[31], policy-makers should be less worried about the price tag and more cautious about the often unwarranted enthusiasm that can be generated by virtual reality.

We all want to stop domestic violence but we need to be careful not to simply buy into virtual reality[32] as a solution because it seems new and exciting. Especially if it takes resources away from other, proven interventions.