Overall, road transport accounts for nearly 43% of New Zealand’s greenhouse gas emissions[2], an increase of over 100% since 1990. Given the nation’s streets are still clogged with conventionally powered vehicles, what can we collectively do about it — as citizens and in our cities?

According to the hyperbolic mantra of the #bancars[3] movement, it’s time to get drastic. Of course, the slogan makes a catchier hashtag than the more rational policy objective[4]: reduce the number of vehicles people own and the kilometres they are driven each year.

It’s also catchier than the policy prescription: invest in alternative modes and infrastructure that would charge drivers the full social cost of driving; and restrict the number of vehicles that can enter dense urban centres through congestion pricing schemes.

But part of the problem with convincing people to get out of their cars is that we rarely examine the true costs of our dependence on them: the personal costs, the financial costs, the cost to health and the cost of investment in road infrastructure — and that’s before we get to the cost to the planet.

Driving is still too cheap

You could walk into a friendly room and quickly have the mood turn hostile by arguing the so-called “ute tax” doesn’t go far enough[5]. The fact is, however, we already pay in numerous ways for our addiction to cars.

A portion of that cost is paid directly by the driver — buying, insuring and fuelling the car. To some degree (though probably less than many believe) drivers also pay for building and maintaining roads through the fuel tax or road user charges.

Read more: Aggressive marketing has driven the rise of the double-cab ute on New Zealand streets — time to hit the brakes?[6]

These are all labelled private costs because they are paid for directly from the driver’s wallet. To which we can add the less tangible costs to personal and collective productivity of those wasted hours stuck in traffic.

What few of us factor into our own car ownership calculations, though, is the cost we must bear as a society. It’s the pollution from a car’s tailpipe that causes an increased risk of asthma[7]. It’s the carbon dioxide that flows from that same tailpipe and contributes to a warming climate. It’s the NZ$5 billion cost of road crashes[8] across the country each year.

These are a massive uncharged bundle of expenses everyone in New Zealand must pay in some way, caused by each driver but not directly paid by the driver.

These “externalities” — the costs beyond the immediate expense of choosing to drive — are social costs. Some argue these are in fact higher than the private costs of driving, and orders of magnitude greater[9] than the social cost of cycling or walking.

Read more: Can the city cycling boom survive the end of the Covid-19 pandemic?[10]

Basic economics tells us that when only the private cost of an activity is charged it appears cheaper than it really is, thereby encouraging that activity. But when the social costs are charged, the activity is more expensive — and less attractive.

Logically, then, to reduce pressure on our roads and environment, drivers should face a charge that more closely reflects the actual cost of driving. That is, the cost of clogged roads, air pollution, climate change, injury and death. 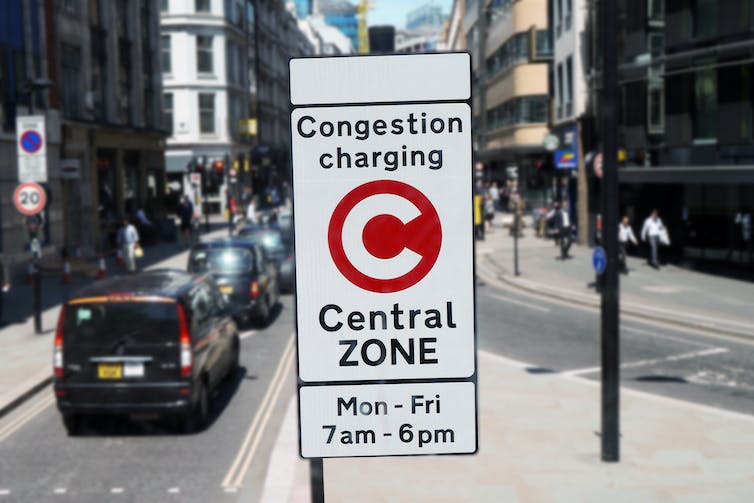 Congestion charging in London has been more successful than early critics predicted. www.shutterstock.com

One solution has already been pursued by other cities. Although some predicted the end of life as we know it when London introduced charges for inner city driving, in practice the congestion charge significantly improved[11] the quality of life and business.

It also created a significant new stream of revenue for the public transportation system, and for cycling and walking infrastructure. Other cities take a similar approach with good results[12], including Singapore, Oslo and Milan. Even in the car-loving US, New York is moving closer to a congestion charge.

This could be done in a city like Auckland, where the main CBD streets are often choked with traffic. This congestion increases the cost of delivering goods to businesses, adds to commute times, reduces the reliability of public transportation, and makes using active modes like walking and cycling much more dangerous.

Congestion pricing could, as in London, provide important additional revenue to Auckland’s transit network. Aucklanders currently face the third-highest[14] public transport fare in the world. This cost reduces the viability of public transport. With lower fares, or even free fares[15], Aucklanders would rush to public transportation.

Money to pay for better things

With the additional revenue, the city could also expand the fledgling network of cycleways, getting more people out of cars and e-scooters off footpaths. All of this would result in fewer cars on the road, faster travel times for everyone and less need for more expensive road building and maintenance.

No, we don’t have to #bancars altogether. But there is substantial room to inject a bit more rationality into our transport policy.

We could better share existing roads with other modes, reduce pressure on the climate and help those who rely on public transport to get more places more affordably.

Market forces got us to where we are today. If we want to address the climate emergency, we will need to harness the power of pricing and pay the real cost of our car addiction.