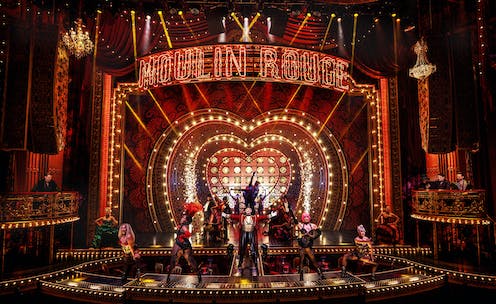 Someone wise once observed that theatre is the only artform to acknowledge its audience, and that’s why it will never die. As patrons press eagerly into Melbourne’s Regent Theatre, Derek McLane’s blood-red set is already pulsating and several pairs of eyes regard us coolly.

Welcome, you gorgeous collection of reprobates and rascals, artistes and arrivistes, soubrettes and sodomites!.

We take our seats inside the Moulin Rouge.

Those familiar with Baz Luhrmann’s wildly successful movie musical (2001) are primed and practically frothing for Lady Marmalade. Samantha Dodemaide, Olivia Vasquez, Ruva Ngwenya and Christopher J Scalzo do not disappoint. They tear into the number, teeth and all, and we’re away!

Our penniless, poetic hero falls instantly for Satine (Alinta Chidzey), superstar of the Moulin Rouge. She, mistaking him for the wealthy Duke she must seduce, lets her guard drop long enough to be swept up in love at first sight. The club, home to waifs, strays and lost souls, hangs in the balance of their doomed romance. Oh – and to add to the urgency of it all, Satine is dying of consumption.

There are some notable points of departure. The orientalism that was so heavy-handed in the film is mercifully diminished. There are counterpoint scenes set against the backdrop of the Parisian elite. And the score has been revamped considerably.

A theatrical riff on one of the 2001 film’s most iconic moments. Global Creatures/ Michelle Grace Hunder

More than 70 songs propel us through this tragic love story. Anthems and chart-toppers like Chandelier and Single Ladies (Put a Ring on It) give way to unexpected strains of Such Great Heights. Omaji delivers a haunting version of Nature Boy. Katy Perry’s 2010 hit Firework is wonderfully re-imagined to reveal the dual imperatives at play for Satine: her fatigue and fast-declining health versus her desire to explode onto the stage with the full force of her being.

As Satine, Chidzey does exactly that. It is a virtuoso performance, powerful and mercurial, vocally dexterous, technically precise and piercingly vulnerable. From the moment of her arrival, all eyes slide towards her. While this effect is clearly supported by lavish staging, lighting, costuming and choreography, it is the humanity she brings to the role that compels us.

In a fiercely talented lineup of artists, special mention is also due to Tim Omaji for his playful yet deeply raw portrayal of the artist-cum-revolutionary, Toulouse-Lautrec; Andrew Cook for his reinvention of the dastardly Duke as supremely assured and menacing; Samantha Dodemaide for her rough-edged, comic yet wonderfully layered Nini; and Simon Burke for his huckster-with-a-heart-of-gold, Zidler.

The ensemble stand out in their own right. As impressive as they are diverse, they give the lie to the tired (read: racist, gendered, etc) assumption that inclusive casting somehow means “sacrificing standards”.

These are performers who can belt out a tune, dance a tango and quite literally fly through the air - sometimes simultaneously. This depth of representation on stage lends authenticity to the depiction of the Moulin Rouge as a haven for marginalised artists.

And now that we’re back to the club and our relative positions therein, I must note that the audience experience remains jarringly safe throughout.

Though we are seated within the Moulin Rouge and are told that Satine came to be there via child prostitution, we are never made to feel uncomfortable or complicit in her commodification.

We hear of the fate of those discarded by merciless patrons and ex-lovers: slit throats, acid disfigurement - we even see it stylised in the Roxanne dance sequence. But the violent dynamics of this world are attributed purely and simply to the character of the Duke.

They are individualised in the text in precisely the same way that the social phenomenon of male violence against women is attributed to individual men. It’s not the system that’s rotten, it’s just a few bad apples.

Patrons are not implicated in the exploitative undercurrents of this world. Global Creatures/ Michelle Grace Hunder

Yes I know - this is a critique of the book and not the production, which is intended as a raunchy romp. But I believe in audiences. We can handle a bit of complexity, especially when it lends resonance to a work.

Still, the show is an undeniable theatrical accomplishment - a spectacular, spectacular feast for the senses. Its key creatives should be enormously proud. My final shout out is to the musical directors, a category of creative often overlooked in reviews of musicals, oddly enough.

Kudos to Luke Hunter and Vicky Jacobs, local legends both, for their wrangling of this extravagant and demanding score. Melbourne audiences, do not miss this sparkling diamond of a show.

Moulin Rouge! The Musical is at the Regent Theatre until May 2022, after which it transfers to Sydney.